The evolution of the Architect’s Office.

Long before Computer Aided Design and Drafting software was available, there were architects silently working on their drafting tables, on massive chunks of papers, aided by an assortment of pencils, Rotring pens, microns, ink, Staedtlers and so on! And then, there are architects now, carrying their ‘smart’ SurfaceBook around, detaching and attaching the keyboard as per will, typing, sketching, drafting and creating models on that single 12 inches of pure technology.

Evolution is a strange game! And truly, stranger than fiction! It took man hundreds of thousands of years to get up on two of their limbs and walk, a few thousand more years to produce fire, so on and so forth. By the time they had domesticated dogs, they were hunting, cultivating food a few thousand years next, and societal policies had already taken a very strong place by the time they were building for shelter or otherwise. This, much later when civilizations started to form!

If one looks at buildings and its gradual change in form, structure, and construction over the time, he will realize that this change has rather been extremely fast when compared to natural evolution. Well, anything that came to this earth as a result of human brainstorming has seen the game of change too fast for its own good! The man took millions of years to stand straight, walk, talk, hunt and form friendships. But it took them only a few hundred years to almost exhaust the resources they were entrusted with. However, we believe we have established the point here!

Evolution- we will be talking about that today! No, not the evolution of buildings from Inca huts to Postmodern Glass boxes, but space where these designs were thought of, conceptualized and brought to life! Yes, we will be talking of the architect’s office today, what it was, what it is now, and what it will be! 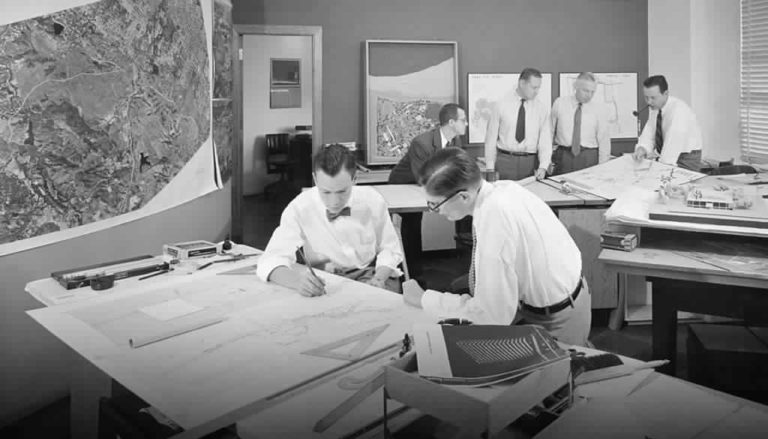 When the Tumulus of Bougon was being built at around 4800 BC in present-day France, we could only imagine one (or more) of our ancestors working in probably open-air situations, making the drawings on the ground using chalk or stone dust to make a rough drawing of the burial ground. There could have been no office, nor pencils, papers or even parchments. The same is with buildings like La Hougue Bie, Tarxian Temples and so on. When the Stonehenge was being built, calculations involved complex solar movements and formulas that are still unclear to the modern human (and we call ourselves super intelligent!). An architect of that time probably was a mathematician more, and his office was on-site, consisting of a large rectangular stone block, chiseled to a smooth surface. While he must have been busy with calculations, his apprentices must be going around, instructing and supervising the workers to chisel the stones smoothly and to the perfect shape and size. 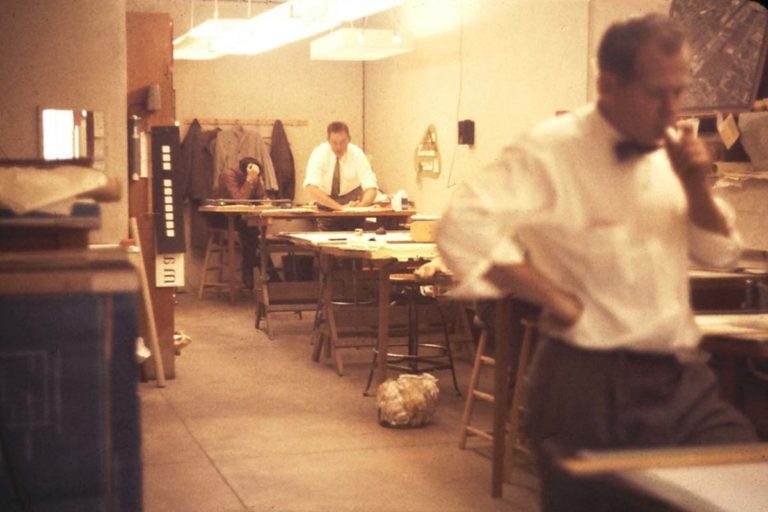 Civilizations of the later date, namely Egyptians, Romans and so on were great builders! And they were equally good architects as well! The typical office of the master builder (mind it, the term architect wasn’t used then) consisted of a single room (or more), with tables and heaps of parchments in place. Basic drawing instruments had developed by then and builders used rulers, scales, and geometric equipment to draw on parchment using charcoal sticks! There were no erasers, so it was all trial and error back then. 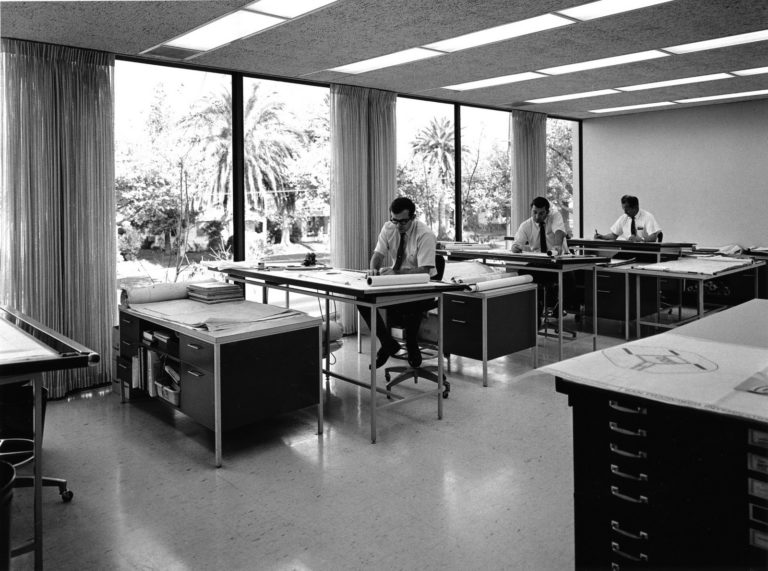 In the mid – 1960s, the drafting room was pristine. No paper, other than the drawing sheet you were laying pencil to was present; one black telephone, one ashtray, and one roll of tracing paper being the other accessories. (Image Source)

Offices have changed considerably in the last hundred years. The advent of technology has only made everything smaller, neater and cleaner. Earlier, offices used to have a series of drafting tables, each of them used to be the workstation for one, with principals and seniors often allotting two or more for themselves. One was dedicated to the creation of blueprints and perspective drawings. The other was used to spread out reference materials. It was equivalent to the modern version of dual monitors. The design process was all manual. Back in the day, there was no app and no computer available to automate the design process. Design usually started on large sheets of blank sheets and butter papers and ended with ammonia printed blueprints. Tracing paper was actively used to create floor layouts, furniture options, service drawings, brick layouts and so on. There were no computerized conference rooms, and designs were discussed on hand rendered plans and layouts. Offices had space exclusively dedicated for storage and workshop- this space consisted of racks of stationery supplies, pens, pencils, inks, rulers, T Scales, set squares and so on. Cardboards, mount boards, and gum were also stacked in abundance because making scaled down models was a daily necessity back then. A typical work board facing any workstation back then consisted of handwritten notes, sketches, and details that have been produced on-site and during discussions with clients, Polaroid photos, and stickers and other personalized items notes from a lover or friend! There were no computers, or even if they were, it was tedious to use the software in their rudimentary stage of development. Offices were large so as to accommodate all the required stuff. Large-scale format copiers were used to copy blueprints. Mood boards were created very differently back then. Knowing that a majority of clients cannot read or understand a blueprint, architects generally included hand-drawn perspectives with every drawing to allow a proper visualization. The design board typically included a floor plan and pictures of décor with samples of materials and fabric. This was how architects helped their client visualize their new space. 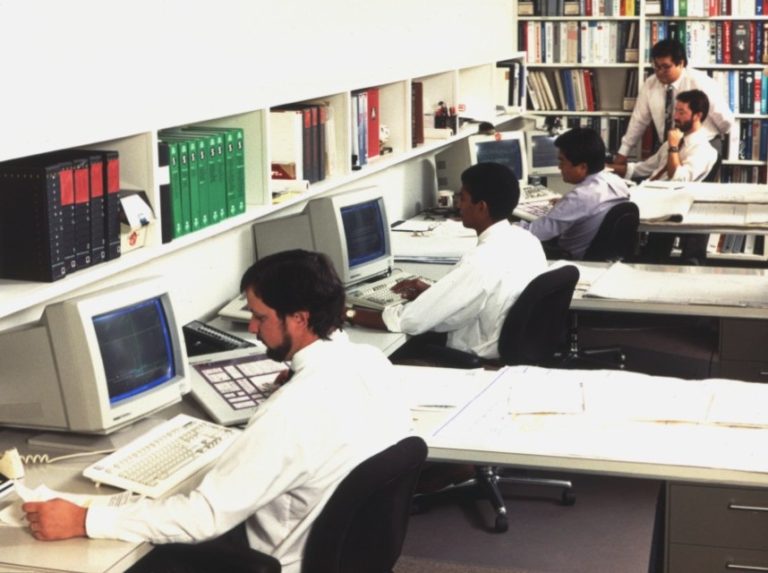 Early computers in the office created a separate studio with large CRT monitors, and the CAD-dogs enthusiastically drafting their day out in those newly acquired machines. (Image Source) 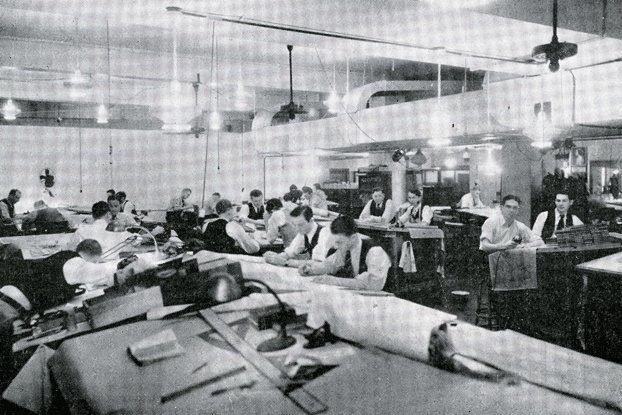 The Oklahoma Department of Transportation’s Drafting Offices where construction plans were prepared in 1932. (Image Source) 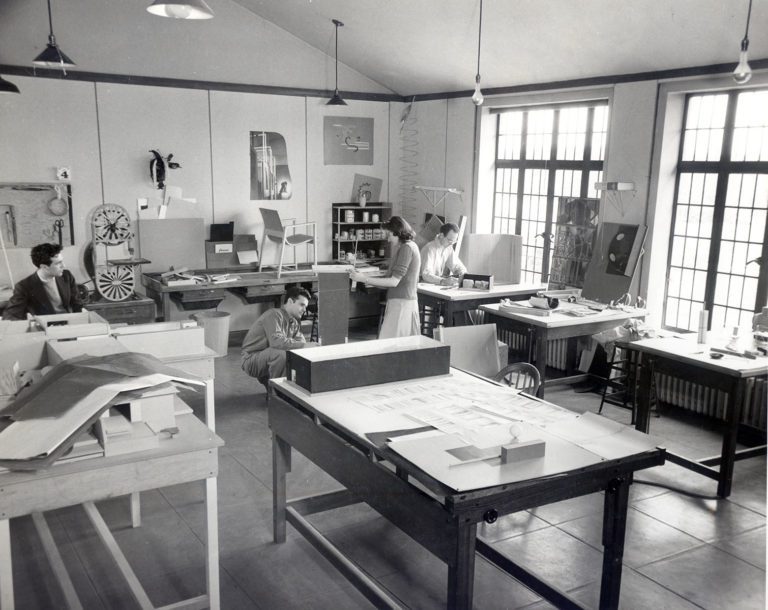 Prior to the advent and popularity of digital systems, making models and scaled-down replicas were actually the best way to imagine the space. (Image Source)

The scene today, however, is much different. 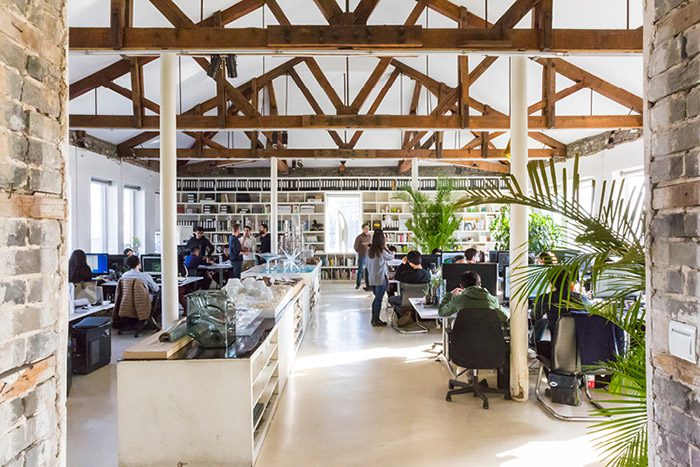 In the present, most offices follow the convenient open office layout with provisions for ample amount of ambient natural light. (Image Source)

Drafting stations have been replaced by powerful computers. Now, a typical architect’s office has a series of computers laid out along a long table. This has drastically reduced the average space consumption. Lead designers or those working with graphic intensive roles like that of a 3D visualizer or a video presentation maker works with the best systems with high-end graphics cards and multiple monitors. Designs now start and end with computers. Building Information Modelling software now aids in creating intelligent virtual models of the design. Service layouts, material schedules, intelligent façade features, heat and wind calculations are available merely at the click of a button now. Prints are available instantly, with plotters and printers present in every office now. The good old paper has been long replaced by the virtual CAD drafting space. Storage spaces have reduced in size over the years, and model making workshops are now present in a handful of studios across the globe. The exponential rise in the price of materials has also led to the practices increasing their dependency on online and virtual means. Equipment in a typical office ranges from digital cameras and tripods to laser measures and other advanced equipment for the survey. Presentations now are mostly made on a powerpoint, and mood boards and hand-drawn perspectives have been replaced with computer-generated photorealistic renders and 3-dimensional walkthrough of the entire design! 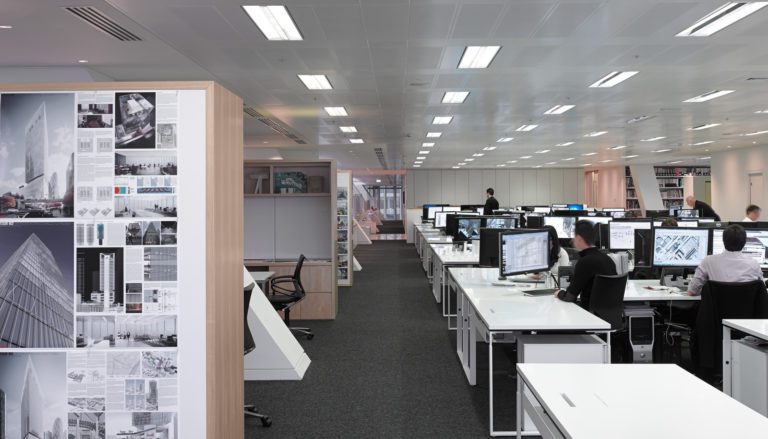 A snap of SOM, London Office. Streamlined, nominal and dominated by technology, architecture is slowly seeing the transition from the manual (or analog?) to digital. (Image Source)

Summing up, we can arrive at the following points:

In the near future, things are going to change even more. Software and computers will be replaced by the real-time Virtual and augmented reality! The architect of the future will design wearing his VR Glasses, standing virtually in the site he is designing on! Clients will be able to virtually see their homes even before it is built.

At Basics, we try to keep the balance. We do agree that a hand-render is a thing of art, a working drawing having the perfect strokes of the Rotring and the perfect line-type is worth more than a hundred plotted sheets. But in this race against time, taking the computer way is the intelligent solution. And we will admit. It is not possible for an architect to run a practice without CAD and BIM interfaces. However, we have tried to keep it as close to the ‘real experience’ as possible. Our studio is small but lively and experimental. We create and recreate mood boards with original materials and samples! You will definitely find a butter paper that is tired of our pen strokes or the plot that has been destroyed by merciless corrections and changes!  Our walls are adored by innumerable items, viz. rendered views of projects, sketches, and perspectives, cards and wishes, notes and observations, to-do lists, material samples, and even models! Yes! We love physical models and try to make as many as we can! Let us just say that we want to keep our love with the old alive and burning while being openly welcoming to the dynamic contemporary! 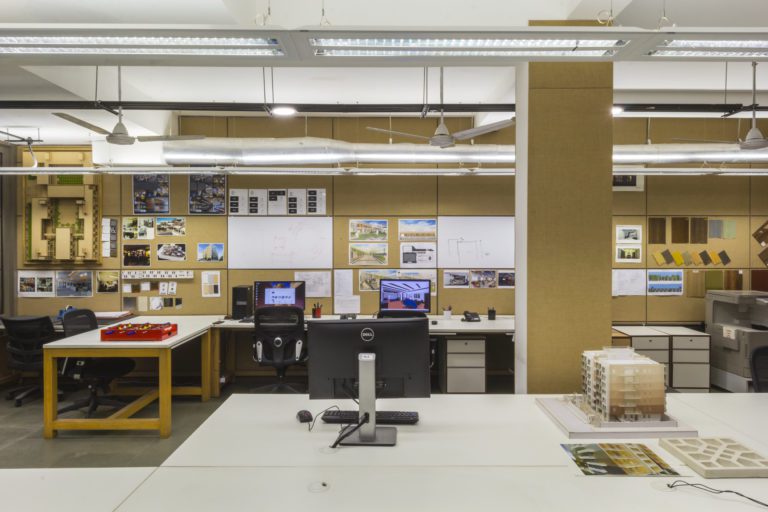 Our humble and cozy studio, where we try to fuse the old and the new and exist in the grey area called Equilibrium!

Technology knows no bounds, and it is hard to tell where it will stop. Or perhaps, it is technology because it never will. Maybe one day, Artificial Intelligence will design buildings and detail out all the necessary parts, produce drawings and do calculations on its own! Maybe, in the near future, Architecture as a profession will totally change its course! Who knows the future!

Till the next time,