Clubhouse as a ‘Communal Anchor’ for urban housing

Basics Architects was approached by a well-known developer to design a clubhouse as a ‘communal anchor’ for an urban housing society in Noida. The clubhouse was to include a large reception & waiting area, bar & family restaurant, ballroom, sports hall, theatre, and a children’s play area. The Interiors had to reflect an ‘aura’ of luxury as well as cater to the communal needs of the residents. The architectural design also had to complement the surrounding views of the swimming pool and open green spaces of the complex.

The design of the clubhouse evolved by keeping in mind the expectations of the end-users. A well-defined area program was outlined after extensive discussions with the developers of the housing development. A good amount of effort focussed on understanding the end-users in terms of their social, leisure, and day-to-day activities. This focussed design approach led to a clear-cut spatial requirement of the project and how the project could add value to the lives of the thousands of residents of the development. Intensive research was also done laying out a broad guideline for the aesthetics of the club after benchmarking similar projects in Delhi and neighboring cities. Through the case studies, there was a certain realization that the users did want contemporary & modern Interiors but were also expecting some sense of luxury in terms of the aesthetics. This understanding gave us, as designers, a singular approach to the project in terms of its look and feel combined with the spatial requirements of the project. The entire design was carried out by clearly understanding that the project success could only be achieved if the club fulfilled the aspiration of every age category of the resident’s starting from a child to the senior citizens. The design in a sense is socially inclusive. The only USP of the project is keeping the end-user as a central focus during every stage of the design.

The clubhouse had to be designed as a ‘Communal Anchor’ for an urban housing society in Noida, India. The area program of the clubhouse included a Large Reception & Waiting area, Bar & Family Restaurant, Ball room, Sports hall, Theatre, and a Children play area. The Interiors had to reflect an ‘aura’ of luxury as well as cater to the communal needs of the residents.

The footprint of the building was already pre-established as per the master plan of the Housing campus. The west facade of the building overlooks the swimming pool, and the other three faces are opaque, facing the rear side of the society.

The approach to the design of a Club has been Minimalist Modernism. The evolution started with the strategic treatment of the west facade. The facade needed protection from the harsh evening sun as well as provide an unhindered view of the pool from the building.

The club has a small funnel-shaped main entrance which explodes into a large double-height lobby creating a sense of surprise. The lobby also has a partial mezzanine floor with large spans floating above the waiting area and further opens out into a veranda overlooking the pool area. The restaurant and the bar have been planned along the glazed facade and seamlessly integrates with the pool. The sports arena and theatres are planned towards the opaque zones of the building. A children’s play area also connects with the main lobby and spills out into the deck.

Screens were designed based on these two parameters using exterior-grade wooden louvers and vertical greens. They were then alternated to create dynamism and movement in the facade. The vertical gardens add to the drama and soften the building elevations in contrast to the hard surfaces of the deck. The rhythmic interplay of the biophilic and wooden screens breaks the monotony of the large facade of the building.

The Interiors of the large lobby have been designed to connect the main entrance with the west glazing. To maintain the flow of wooden ribbed slats on ceilings, complement the movement in the texture of the grey travertine on the walls. The richness of the travertine finish adds a luxurious touch to the wooden texture high gloss floor. The ceiling has been shaped to flow with the RCC roof and firmly takes its shape. In juxtaposition to the reception, the bar follows a very casual ambiance with exposed services and a ceiling. The patterned tiles highlight and livens up the bar as well as the adjoining corridor. The ballroom with high roof and fabric wall panels reflects grandeur.

The Interior Design of the Clubhouse serves as a central anchor for the housing development for residents of all age groups. It provides opportunities for cultural and leisure. The visual impressions generate an interesting dialogue as well as provide a sense of luxury to its users. 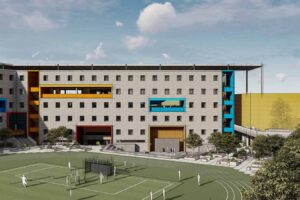 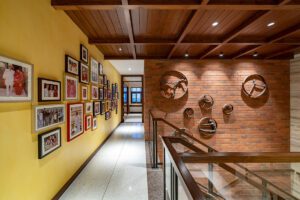